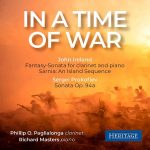 A project featuring works by Ireland and Prokofiev which were composed during (and have a connection to) World War II. Both clarinet works were written in 1943 and Ireland’s ‘Sarnia’ was the piece that he was carrying with him when he fled from Guernsey directly ahead of the Nazi advance. The recording will offer a ‘North American’ interpretation of both works by John Ireland and an opportunity to hear the Prokofiev Flute Sonata arranged for clarinet.