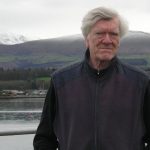 It might seem odd to lament the passing of a contemporary British composer on a website devoted to the work of a British composer from another generation, but Tony Payne was no ordinary composer. Quite aside from his own extensive catalogue, Tony spent a good deal of time championing the cause of the many British composers he admired from the late nineteenth and early twentieth century – Elgar and Vaughan Williams of course, but also Holst, Bax, Bridge and John Ireland, amongst others. Looking at this from an early twenty-first century point of view it is unusual ; when Tony was a young composer in the 60s and even in the 70s, this would have been considered at best wilfully eccentric and at worst bordering on the perverse, a time when British music from the turn of the last century was considered old-fashioned, amateur and of no interest to any serious musician.

Tony’s quiet and determined support, his work as an honest and constructive critic and his pioneering book about Frank Bridge, all showed the way long before such enthusiasms were common place. His elaboration of Elgar’s 3rd Symphony will surely be remembered as one of the most remarkable pieces of detective work in musical history, a towering achievement. That the success of this work has overshadowed Tony’s own music is cause for regret, but something that would no doubt make him shrug his shoulders. Let us hope this isn’t the case for long – there are some very fine chamber works, and a number of impressive orchestral pieces such as ‘The Spirit’s Harvest’ and ‘Time’s Arrow’ (which has one of the most arresting openings of any orchestral piece I can remember), that need to be heard.

It seems fitting that the last time I saw Tony (with his devoted wife, the soprano Jane Manning, who died just a month ago), was at a concert that included the Elgar 3rd Symphony and Ireland’s Piano Concerto, just a few days before the first lockdown in March 2020. It was by no means unusual to see them at concerts, eager as they both were to be supportive to young musicians and composers, amateurs and professionals. Tony was beaming – ‘I just love that piece’ he said, after the Ireland Concerto. It is beyond sad that once things really get back to some kind of normal, they won’t be seen any more.

Rest well dear Tony. I hope that Sir Edward is giving you due credit for all your work on his behalf.