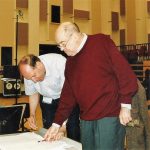 Our friend and much valued Trustee, Graham Parlett, died on 30th May, after a short but terrible and debilitating illness. Although the most modest of men, who wore his very considerable knowledge, not just of Ireland but in particular Bax, as well as many other highways and byways of British music lightly, Graham’s contribution to the work of the Trust cannot be over-estimated. I cannot recall him ever missing a Trust meeting, until the ravages of Covid made getting together in person impossible, and he was always available to advise or lend a sympathetic ear.

On a more practical level, Graham created thoroughly idiomatic arrangements/orchestrations of a number of Ireland works, that have gone on to have renewed lives in the concert hall and recording studio. These included shorter pieces for violin and piano or piano solo, such as ‘Soliloquy’ and ‘Cavatina’, five of the most popular of Ireland’s solo songs, performed and recorded by Roderick Williams, and more recently an orchestration of the late ‘Fantasy Sonata’ for clarinet and piano, completed for a recording made by Robert Plane and the BBC Scottish Symphony Orchestra conducted by Martyn Brabbins.

The ‘Fantasy Sonata’ in particular is an incredible achievement, and one which I must admit, I had my doubts about, until I heard it for the first time at the recording sessions in Glasgow in 2019. Making Ireland’s demanding piano part sound so natural and so ‘Irelandesque’ when played by a string orchestra, showed not only a deep understanding of the composers idiom, but a shrewd and detailed knowledge of how to get the very best out of the forces that were available. Graham characteristically brushed off my praise, and that of the soloist, conductor and orchestra, almost embarrassed by the attention he was getting, but this is an impressive musical mind at work by any standards.

Graham’s death will of course be felt most keenly by his family and friends, but equally by all those who love British music. He would have hated the phrase ‘unsung hero’, but I think he was probably just that.