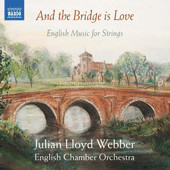 This wide-ranging programme of English music for strings includes the world première recording of Howard Goodall’s moving ‘And the Bridge is Love’, in which Julian Lloyd Webber plays cello, and of William Lloyd Webber’s ‘The Moon’, only performed for the first time in 2014. There are also established classics such as Elgar’s Introduction and Allegro, Op. 47, as well as novelties in the case of the never-before-recorded arrangements by Elgar’s friend and biographer W.H. Reed of the two Chansons

The Ireland work is the Minuet from ‘A Downland Suite’ (version for string orchestra)
http://www.naxos.com/catalogue/item.asp?item_code=8.573250