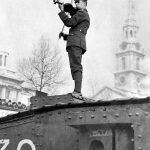 March 2017 sees the 100th anniversary of a work which propelled its British composer into the limelight; the Violin Sonata No. 2 in A minor by John Ireland. Violinists Madeleine Mitchell, Susanne Stanzeleit,  Midori Komachi, Sophie Rosa and Louisa Stonehill (who also recorded the work this year) are amongst the soloists taking up the work to commemorate the centenary.

On 6th March 1917 a remarkable concert took place at London’s Aeolian Hall.  An expectant music world had heard that the composer, John Ireland, had written a powerful violin sonata which was to be performed by the celebrated English violinist Albert Sammons and the Australian pianist William Murdoch, both on leave from the Grenadier Guards.  Sammons had been famously photographed in uniform playing his violin on top of a tank in London’s Trafalgar Square.

“A memorable work by Mr. John Ireland”
A reviewer, catching the mood of the time, reported that “…the recital was made memorable by the introduction of one of the finest works by which British chamber music has been enriched even in these prolific days.”  The performers, playing in uniform, impressed the audience to such an extent that it made Ireland an overnight success – a rare event in the annals of chamber music.

As Ireland wrote, “For me it was an electrifying occasion. Little of my music had been publicly heard, and I felt that my fate as a composer was to be decided at that particular moment in time, as proved to be the case….it was probably the first and only occasion when a British composer was lifted from relative obscurity in a single night by a work cast in a chamber music form.”

Several of the centenary concerts are being supported by the John Ireland Charitable Trust; the organisation formed in 1968 to promote awareness of Ireland’s works through recordings, performances and publications.

Bruce Phillips, Director of the Trust, explained:  “When we think of the great flowering of British music that blossomed towards the end of the nineteenth century, Ireland tends to be overlooked in that star-studded galaxy!  Whereas most of the composers of his generation excelled in the larger forms of music, Ireland’s main contribution lies in the smaller forms of chamber music, piano music and song.  That said, he wrote a handful of outstanding works for orchestra including his well-known Piano Concerto and A London Overture.”

Performances of the work programmed from violinists and pianists during 2017 include Midori Komachi and Simon Callaghan, Sophie Rosa and Benjamin Powell, Susanne Stanzeleit and John Thwaites, Louisa Stonehill and Nicholas Burns, and Julia Liang and Alexander Kirk.  Any details which are known are listed on the ‘Concerts’ page.
Associated film: https://www.youtube.com/watch?v=CPiqdI3Dz3E

i.    A new sonata by John Ireland was a feature of the violin and piano recital, given by Mr. Albert Sammons and Mr. William Murdoch, in the Aeolian Hall, yesterday afternoon. It is a work of extreme earnestness, not to say austerity. At times, indeed, the composer’s methods seem to suggest thoughts which lie too deep for utterance, so portentous is his solemnity, and so laboured his message, but that is the way too often in these days with our native composers, who seem unable ever to regard this world other than [as] a vale of tears. Still, there are some excellent pages in the work, especially in the slow movement, in which really impressive results are obtained by quite simple means. The sonata was very carefully and sympathetically played by Messrs Sammons and Murdoch, though the latter might, perhaps, have moderated his energies upon occasion with advantage. Beethoven’s Sonata in A Major and Brahms’s golden sonata in the same key (Op.100) completed the programme.

The violin recital given yesterday by Albert Sammons and William Murdoch was made memorable by the introduction of one of the finest works by which British chamber music has been enriched even in these prolific days.

The composer, John Ireland, has occupied for sometime a kind of midway position between those of his contemporaries who emancipated themselves with feverish haste from the narrow tradition and those who had neither desire nor initiative to desert the academic fold. In short, his originality grew slowly towards maturity. But that it grew surely and robustly is proved in the new sonata for violin and piano.

The opening is rugged, and all its emotions are vigorous, though expressed in lyrical form. Even the humour of the last section gathers a flavour of the heroic from the context, much as the fun of our soldiers gathers it from their hardships. There is no cue [clue?] to the composer’s intentions, but one receives a definite impression of a sane idealism that will pass through an ideal without a thought of self-pity. There is not a morbid moment in it from end to end.

The players had no easy task. To mention one feature only, a lesser player than Sammons would have been tricked into some false intonations, for John Ireland has an unusual gift of modulating far afield with a deceptive ease. But both players acquitted themselves nobly, and are to be congratulated on the service they have rendered to British music.

The programme also comprised an early Beethoven and a late Brahms sonata.