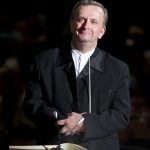 Music Director, conductor and promoter, David Wordsworth, has been appointed Director of the John Ireland Charitable Trust with immediate effect from November 2017.  Wordsworth succeeds Bruce Phillips, who has been Director of the Trust for over a decade.  The Trust was formed in 1968 by Norah Kirby, Ireland’s companion, secretary and house-keeper, for the purpose of supporting performances, publication and recordings of the composer’s music.

David Wordsworth has worked as a conductor, teacher, pianist, publisher, writer on music and as a promoter of contemporary music.  Amongst many other responsibilities, David has been Music Director of the London-based Addison Singers for over twenty years and has in addition conducted choirs of all kinds in many parts of the world.

Wordsworth was Artistic Director of the 5-day Festival ‘John Ireland in Chelsea’, where Ireland was organist, which marked the 50th anniversary of the composer’s death and was mounted by the Trust in 2012.  The Festival programme included many of Ireland’s major works, alongside pieces by his pupils Benjamin Britten, Alan Bush, Geoffrey Bush, Richard Arnell, E J Moeran and Helen Perkin, as well as his teacher Charles Villiers Stanford.

David Wordsworth is currently curating a year-long festival of American music being held at St John’s Smith Square, London, in which he will conduct a number of iconic American works including Bernstein’s ‘Chichester Psalms’.  Recent and forthcoming projects include a performances of Haydn’s ‘Nelson Mass’, Orff’s ‘Carmina Burana’, fund-raising ‘Come and Sing’ concerts, and a rare performance of the Mozart ‘Requiem’ with the accompaniment transcribed by Czerny for piano duet.  Other highlights include a trip to Austria with his own group, The Addison Singers, and a celebration of Howard Skempton’s 70th birthday at King’s Place.  In 2018 he will become Associate Artistic Director of the Brandenburg Choral Festival of London, and make his debut at the world-renowned Three Choirs Festival.  David Wordsworth’s world premiere recording of Sir Lennox Berkeley’s ‘Stabat Mater’ on Delphian Records was released last year to considerable critical acclaim and was nominated for a Gramophone Award.

David Wordsworth writes of his appointment: “I remember the first time I came across Ireland’s music – I was around 16 years old and one of the ‘London Pieces’ had been set as a Grade 8 piece for my Associated Board exam.  Even then, his music made the most profound impression on me, for reasons that I perhaps didn’t realise at the time, but have become clearer as time has gone on.  The combination of that very particular English melancholy, a wonderful gift for melody, impressionistic harmony and a restrained passion, make his voice instantly recognisable and I have come back to the music as a listener and performer many times since.  With all this in mind, it is with a great sense of pride that I take over as Director of the John Ireland Trust and with some trepidation as I succeed Bruce Phillips who has fulfilled the role with such distinction for so many years.”

John Ireland’s legacy
The English composer John Ireland (1879-1962) was born near Manchester, studied and taught at the Royal College of Music, lived in Chelsea for over 50 years and died in a converted windmill in Sussex in 1962.

In recent years, there has been a resurgence of recordings and performances of John Ireland’s songs, chamber and choral works – many by the younger generation of artists – which have been supported by the Trust.  These artists have included Rebeca Omordia, Maria Marchant, Clare Howick, Philip Handy, Peter Cigleris, Roderick Williams, Kitty Whately and the Carice Singers.  Ireland’s orchestral music has been taken up by conductors including John Wilson and Martin Yates.

Ireland’s enduring compositions for solo piano, including ‘Sarnia’ and ‘London Pieces’, and the emotionally-charged Cello Sonata have been enjoying particular popularity with artists and audiences alike.  Major orchestral performances of the intensely personal Piano Concerto – once a regular at the BBC Proms – have also been taking place internationally, given by some of the composer’s current champions; Mark Bebbington, Leon McCawley, John Lenehan, Victor Sangiorgio and John Paul Ekins.

2017 has seen the 100th anniversary of the work which propelled Ireland into the limelight; the Violin Sonata No. 2 in A minor.  Violinists Madeleine Mitchell, Susanne Stanzeleit, Midori Komachi, Sophie Rosa, Julia Liang and Louisa Stonehill (who also recorded the work this year) have been amongst the soloists taking up the work to commemorate the centenary, several of these performances being supported by the Trust.