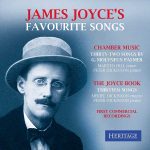 An enterprising release featuring James Joyce’s poems including G. Molyneux Palmer’s setting of ‘Chamber Music’, performed by Martyn Hill and a performance by Meriel Dickinson of a selection of 13 songs by more familiar composers: Moeran, Bax, Roussel, Herbert Hughes, Ireland, Sessions, Bliss, Howells, Antheil, Edgardo Carducci, Goossens, C. W. Orr, Van Dieren. Both recordings were made for the BBC in 1988 and 1982 respectively and appear here on CD for the very first time.

Of particular interest is the cycle by Palmer, a kind of Irish Winterreise that adds significantly to the history of Georgian song. Palmer was a pupil of Stanford who spent the last thirty years of his life in Dublin, latterly as an invalid, where his music, including operas and choral pieces, gained some performances. Letters between Joyce and Palmer show how enthusiastic Joyce was about these songs.