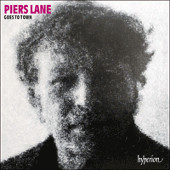 ‘Ballerina’ by John Ireland may sound familiar, but this is in fact the first recording of a piece published only after the recording sessions. It is the early version of Ireland’s ‘Columbine’ (1951), originally called ‘Impromptu’, a title its composer disliked. For its recent publication it was renamed ‘Ballerina’, a working title used by Ireland on one of his sketches for the piece, now held in the British Library. It was originally commissioned in 1949 by the American screenwriter William Rose, as a present for his wife Tania (née Price). Ireland reworked it before its publication as ‘Columbine’ two years later. Alan Bush, the trenchant British composer who studied with Ireland from 1927 to 1932, used to play this early version and preferred it to the revised ‘Columbine’, which he described as bowdlerized! After a performance I gave in Milan of Ireland’s Piano Concerto, Bruce Phillips, Director of The John Ireland Charitable Trust, asked me what other Ireland I was performing for the fiftieth anniversary of the composer’s death. I mentioned this recording and the possibility of including the delicious ‘valse lente’ ‘Columbine’; it was he who suggested I might consider ‘Ballerina’ instead. Piers Lane