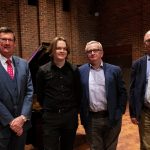 Director of the John Ireland Trust, David Wordsworth, sponsor of the First Prize Professor Vincent Emery, and Kevin Appleby, Chief Executive of Turner Sims Hall, were the adjudicators for The John Ireland Prize on 21st March 2022 at Turner Simms Hall, University of Southampton. They are shown in the photo with this year’s winner, Adam Greenhow.

The competitors took part in a most enjoyable lunchtime concert before a large audience after which the judges made the following awards of £500, £300 and £200:

Adam Greenhow – for a performance of a selection of songs

Amelia Kelly-Slogrove – for performance of a selection of songs

The full list of competitors and their programmes were as follows:

Oliver Davis accompanied by Duncan Honeybourne
Sea Fever, If there were dreams to sell, The Bells of San Marie, Love is a sickness full of woes

Amelia Kelly-Slogrove accompanied by Amanda Slogrove
I have twelve oxen, Ex Ore Innocentium and The Bells of San Marie