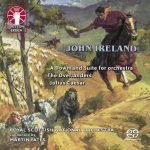 The Ealing Studios production of The Overlanders, directed by Harry Watt, produced by Michael Balcon, and starring Chips Rafferty, was first shown on 19 September 1946 at the Odeon Theatre, Leicester Square. John Ireland’s music for the soundtrack was performed by the Philharmonia Orchestra conducted by Ernest Irving, and in May 1947 Muir Mathieson and the London Symphony Orchestra recorded a ‘selection from the main themes’ for Decca. In 1948, Ireland was asked to make a suite from the film music but decided that it would be impracticable, though he later joked about producing a Sinfonia Overlandia to match Vaughan Williams’s Sinfonia Antartica. It was not until 1971 that Boosey & Hawkes published the study score of a five-movement suite arranged by Charles Mackerras as well as Two Symphonic Studies by Geoffrey Bush, commissioned by Norah Kirby and the John Ireland Trust, which was based on sections from the rest of the manuscript. Recordings of these published arrangements were made by the London Philharmonic Orchestra under Adrian Boult (Lyrita), and the London Symphony Orchestra under Richard Hickox (Chandos).

The new edition is a transcription of the original manuscript of the complete film score, which was mostly orchestrated by Ernest Irving. The third section, Departure of Ship, which consists of eleven bars and is scored for cor anglais solo and divided cellos, is the only one in Ireland′s own hand. Alan Rawsthorne was responsible for orchestrating Catching the Brumbies and Breaking the Brumbies, and Roy Douglas assisted Irving in scoring Night Stampede. Ireland′s original short score has not been traced. In the arrangements by Mackerras and Bush, the orchestration has sometimes been altered, with the original bass clarinet, tenor tuba, and piano parts omitted or assigned to other instruments. The new edition reinstates the original instrumentation.

Owing to shortage of time, the orchestration was carried out in haste, with virtually every page of the manuscript containing inconsistencies of notation, especially in the matter of dynamics, articulation, accidentals, and beaming. In such cases,  the most appropriate options have been applied consistently among the relevant instruments. Wrong notes, missing accidentals, and misspellings of Italian words have been silently corrected.

The original rehearsal letters used in the manuscript are chaotic, and new ones have been assigned, together with bar numbers. Tempo markings are sometimes absent, and appropriate tempi have been inserted editorially, some taken from Mackerras’s and Bush’s arrangements. As is customary with film scores, metronome markings appear frequently throughout, enabling the conductor, while watching the film on a big screen behind the orchestra, to tailor the speed to the action. Although these have proved useful guides, they are the result of practical necessity and need not be taken literally when the music is heard on its own.

It usually happens with film scores that cuts and repeats are ruthlessly applied by the musical director to fit the action on the screen, and passages intended for one sequence end up being used for another. The Overlanders has comparatively few such transpositions, though it has its fair share of repeated and truncated passages, often with memoranda scribbled on the page: e.g. ‘Extra bar here see last page’. Most of the repeats derive from the manuscript, but a few extra ones have been added.

Many passages in the new edition have never been performed since the film’s soundtrack was recorded in 1946, and a few pages that were omitted altogether (such as Finding Sailor) have never been played before.