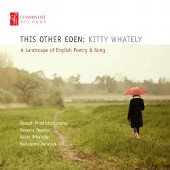 A beautiful collection of English Poetry and Song performed by mezzo-soprano Kitty Whately and her family and friends.
The pain of longing for home, of true not sentimental nostalgia, deep seated in the art of the British Isles, permeates this album’s exquisite programme of poetry and song, from Shakespeare’s Scepter’d Isle, the ‘blue remembered hills’ of Housman’s Shropshire or Hardy’s Wessex, to the idyllic Ireland of Joseph Campbell’s ‘I wish and I wish’.
Features beautiful texts by poets including Dante Gabriel Rosetti, his sister Christina Rosetti, AE Housman and John Masefield
The stoicism the British are known for flickers in so many of the songs on this album, hope for peace and hope for eternal values of beauty and truth. It stands proud in ‘The fields are full’, one of many fine songs written by Ivor Gurney in the fruitful post-war years following his initial recovery from shellshock, and there too in John Ireland’s ‘Earth’s Call’,
Kitty Whately, a BBC Radio 3 New Generation Artist for the 2013–15 seasons, was the winner of both the Kathleen Ferrier Award, and the 59th Royal Over-Seas League Award for Singers in 2011
Pianist Joseph Middleton was described in the BBC Music Magazine as ‘one of the brightest stars in the world of song and Lieder’, he has also be labelled as ‘the cream of the new generation’ by The Times.
Featuring Kitty’s actor parents, Kevin Whately (Lead roles in Auf Wiedersehen Pet, Inspector Morse, and title role in Lewis) and Madelaine Newton (Theatre and TV actress including leading roles in the hugely successful series When The Boat Comes In, The Spoils of War and Auf Weidersehen Pet)
Award winning Navarra Quartet feature both individually and as a quartet in Samuel Barber’s beautiful Dover Beach.