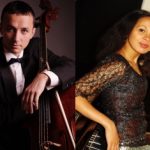 For pianist Rebeca Omordia, continuing her exploration of music by British composers has led to a UK and Romanian tour with cellist, Razvan Suma; resident cellist and director of the Romanian National Broadcasting Orchestras.

Their programme of British works for cello and piano will include John Ireland’s powerful Cello Sonata, Ian Venables’ heart-rending ‘Elegy’, and ‘Fast Music’; a new work written especially for the tour by Robert Matthew-Walker.

Matthew-Walker is a prolific composer, having written over 160 works, although he is perhaps better-known to classical audiences as a music critic.  Written at the request of Omordia, it was the composer’s idea that the piece be called ‘Fast Music’.

“On researching the repertoire, the soloists could find no short fast pieces to contrast with the prevailing slow or moderate ones”, explained Matthew-Walker.  “The new work is in a single movement, lasting seven minutes, and is fast throughout, the final bars catching a glimpse of music in a quite different style – but still fast!”

For cellist Razvan Suma, John Ireland’s Cello Sonata was one of the greatest musical revelations; “It is a work full of melancholy and drama – almost brutal at times – and wrapped up in a grandiose and solid sonata structure”, he explained.  “I was fortunate to perform the transcription of the work for cello and strings in a live broadcast with the Romanian Chamber Broadcasting Orchestra in Bucharest last summer and I am looking forward to performing it again with Rebeca on tour in 2017.”

“John Ireland’s Cello Sonata is one of his darkest works, inspired by the supernatural world of Arthur Machen’s writings”, said pianist Rebeca Omordia.  “It’s full of mystery and poses technical and musical challenges for the pianist.  I’ve played it many times, with cellists Julian and Jiaxin Lloyd Webber and Raphael Wallfisch, and now with the celebrated Romanian cellist, Razvan Suma, with whom I have performed it in Romania.”

Rebeca’s recent acclaimed performances of John Ireland’s Piano Sonata, ‘Legend’ for Piano and Orchestra and several of the composer’s outstanding miniatures have dazzled audiences and critics alike and in her tour with Razvan Suma, the duo will be performing the following British and Romanian works:

Sponsored by the Romanian Cultural Institute and the John Ireland Trust, the UK tour is to be followed by performances in Romania and a live broadcast from the Radio Hall in Bucharest on 17th May.
RÄƒzvan Suma is resident cellist and director of the Romanian National Broadcasting Orchestras.
Rebeca’s debut recording features Vaughan Williams’s ‘Introduction and Fugue’ with pianist Mark Bebbington and has recently been released on the SOMM label.
Full details: www.rebecaomordia.com

Tour reviews of the John Ireland Cello Sonata:
“…Suma and Omordia were superbly controlled and their performance enthralling”
Michael Round, The British Music Society Journal

“After a taut and impulsive take on the initial Moderato, the slow movement exuded an anxiety that motivated the expected fatalism, then a finale whose tensile progress resulted in a peroration of unusual eloquence and resolve. Certainly, Ireland’s music only stands to benefit from such a forthright approach.”
Richard Whitehouse, Arcana
https://arcana.fm/

“There was never any doubt about the players’ empathy in phrasing as one, as well as their ability to attune themselves to the slightly haunted atmosphere of the Sussex Downscape which inspired Ireland.”
Christopher Morley, The Birmingham Post