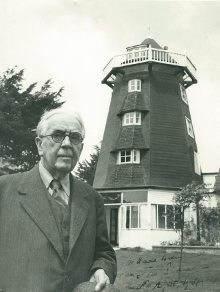 Born near Manchester, studied and taught at the Royal College of Music, lived in Chelsea, London for over 50 years and died in a converted windmill in Sussex. Ireland’s foremost inspirations were the ancient landscapes of the Channel Islands, Dorset and Sussex and the writings of pagan mystic Arthur Machen; the composer recounting that he himself had experienced a ‘vision’ on the South Downs.

John Ireland was born in Bowdon, near Manchester, England on 13th August 1879. His parents were literary people and knew many writers of the day, including Emerson. Ireland entered the newly-established Royal College of Music in London at the age of fourteen, lost both his parents shortly after, and had to make his own way as an orphaned teenager, studying piano, organ and composition. The last was under Sir Charles Stanford, who taught many of the English composers who emerged at the end of the 19th century: Ralph Vaughan Williams, Gustav Holst, Frank Bridge (born in the same year as Ireland), Eugene Goossens, Arthur Bliss, Herbert Howells, George Butterworth, and many others.

Ireland destroyed almost all his student works and juvenilia (the beautiful Sextet for clarinet, horn and string quartet being one of the few works which he permitted to be published, and then only towards the end of his life) and emerged as a celebrated composer towards the end of World War I when his Violin Sonata No.2 in A minor brought him overnight fame. From then until his death in 1962 he led an outwardly uneventful life combining composition, composition teaching at the Royal College (where his pupils included Benjamin Britten and E. J. Moeran), and his position as organist and choirmaster at St. Luke’s Church, Chelsea, in London.

Ireland’s music belongs to the school of ‘English Impressionism’. Having been brought up on the German classics, notably Beethoven and Brahms, he was strongly influenced in his twenties and thirties by the music of Debussy, Ravel, and the early works of Stravinsky and Bartók. While many of his contemporaries, such as Vaughan Williams and Holst, developed a language strongly characterised by English folk song, Ireland evolved a more complex harmonic style closer to the French and Russian models. Like Fauré, he preferred the intimate forms of chamber music, song, and piano music to the larger orchestral and choral canvases, He wrote neither symphony (unlike his friend Arnold Bax who wrote seven) nor opera and only one cantata, These Things Shall Be, but his Piano Concerto is arguably the best to have been written by an Englishman, and is a work of intense emotion and nostalgic feeling.

Ireland was strongly influenced by English poetry. His settings of A. E. Housman, Thomas Hardy, Christina Rossetti, John Masefield and Rupert Brooke are among the best known of his works. He was also highly susceptible to the spirit of place. He lived for many years in London’s Chelsea (Chelsea Reach is a depiction in the form of a barcarole of that great sweep of the Thames as it passes along the Embankment to the west of the Houses of Parliament). He was also devoted to the Channel Islands of Guernsey and Jersey. Their location between England and France must have seemed appropriate to his musical orientation, but more importantly he found there traces of prehistoric pagan ritual to which he had originally been drawn through the writings of the Welsh writer Arthur Machen.

But perhaps his greatest love was for the English county of Sussex, a landscape of rolling downs and (in Ireland’s day) isolated villages, including Amberley whose ‘Wild Brooks’ – streams coursing through fields – gave him the inspiration for one of the most brilliant of his piano pieces. Ireland eventually retired to Sussex in 1953 when he bought a converted windmill, Rock Mill, underneath the Downs. He died there on 12th June 1962.

Ireland’s music is intensely personal in style and has always attracted a devoted following among discerning music lovers. As well as his Piano Concerto, previously mentioned, works that continue to be frequently performed and recorded are:
A Downland Suite and Concertino Pastorale for strings, The Overlanders, A London Overture, Mai-Dun, and The Forgotten Rite for orchestra, sonatas for cello and piano, violin and piano, and clarinet and piano, The Holy Boy, Sea Fever and his beautiful motet Greater Love (to name but a few). His hymn tune My Song is Love Unknown is sung in churches throughout the English speaking world.