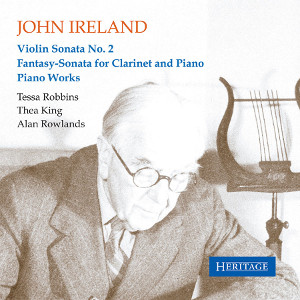 This record brings together two classic performances of chamber works by John Ireland. Originally made for the SAGA label in the early 1960s, the recordings have been remastered and both appear on CD for the first time. It is particularly gratifying to feature the playing of violinist Tessa Robbins, one of the UK’s finest post-war violinists, who made precious few recordings. Alan Rowlands’ stereo performances of Ireland’s popular piano pieces receive their first commercial release and offer an opportunity for comparison with the earlier mono recordings he made for Lyrita. Thea King performs the Fantasy-Sonata which was originally written for and performed by her teacher (later her husband), Frederick Thurston. The project is supported by the John Ireland Trust.