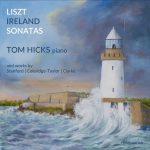 Hailed as an artist of ‘magnificent pianism’, Guernsey-born pianist Tom Hicks has been praised for his ‘gorgeously creative playing’ that ‘transports the listener to another place and time’. Hicks is a gold medallist in numerous national and international competitions and holds degrees and awards from The University of Manchester, The Royal Northern College of Music, Yale University and Northwestern University, where he now lectures. His first disc featuring John Ireland’s Sarnia, ‘Tom Hicks: Ireland and Tchaikovsky’ has been described as ‘brilliantly evocative’ by Colin Clarke in International Piano, and ‘gorgeously creative’ by Scott Noriega in Fanfare.

In his first recording for Divine Art, Tom presents stellar performances of two major Sonatas – those of Franz Liszt and John Ireland. A generation apart, both are highpoints of the Romantic and post-Romantic era. This playing puts Hicks at the top of the tree for his bold expressiveness and vision.

On this album Hicks prefaces the Sonatas with shorter, but equally imaginative and expressive pieces: two Preludes by Stanford, Cortège by Rebecca Clarke, and one of the charming waltzes from the ‘Three-Fours’ Suite by Samuel Coleridge-Taylor.

Tom Hicks is also a strong supporter of contemporary composers and his new album of music by British composer Camden Reeves, inspired by the harmonies and rhythms of blues music, will be released in the late spring of 2022 (“Blue Sounds”) – Métier MSV 28604)